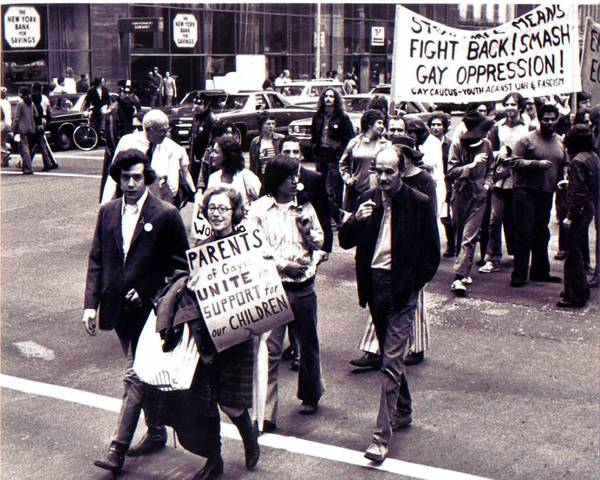 On June 25, 1972, Jeanne Manford, an elementary teacher, enthusiastically marched with her son, Morty, in the Christopher Street Liberation Day Parade. Determined to express love and support not only for her son, but also for other gays facing rejection and discrimination, she carried a homemade sign proclaiming a powerful message: “Parents of Gays Unite in Support for Our Children.” Overwhelmed by the reaction of the stunned marchers and spectators hugging her and begging her to speak to their parents, Manford decided to take action. She and her husband, Jules, began organizing meetings for parents of lesbians and gays to provide support and educate the public. Encouraged by the success of the local meetings, support groups began forming across the country.

By 1980, P-FLAG, then known as Parents FLAG, expanded nationwide educational and faith-based initiatives, disseminating information to the general public, and in 1981, a national office was opened in Los Angeles. In 1982, PFLAG, the Federation of Parents and Friends of Lesbians and Gays, was incorporated in California. Relocating to Denver in 1987, PFLAG continued expanding educational and advocacy programs, and in 1990, the national PFLAG office opened in Washington, DC. In 1993, the word “Families” was added to the PFLAG name and bisexuals were added to PFLAG’s mission. In 1998, PFLAG vowed to never support any policies that did not include transgender people.

With a National Board of Directors and 13 volunteer Regional Directors, PFLAG has over 400 chapters throughout the U.S. and Puerto Rico. At local, state and federal levels, PFLAG members are dedicated to supporting lesbian, gay, bisexual, transgender and queer (LGBTQ) people and keeping them united with family members, friends and allies. PFLAG’s goal is to protect civil rights and promote equality for all citizens through a three-fold mission of support, education and advocacy.